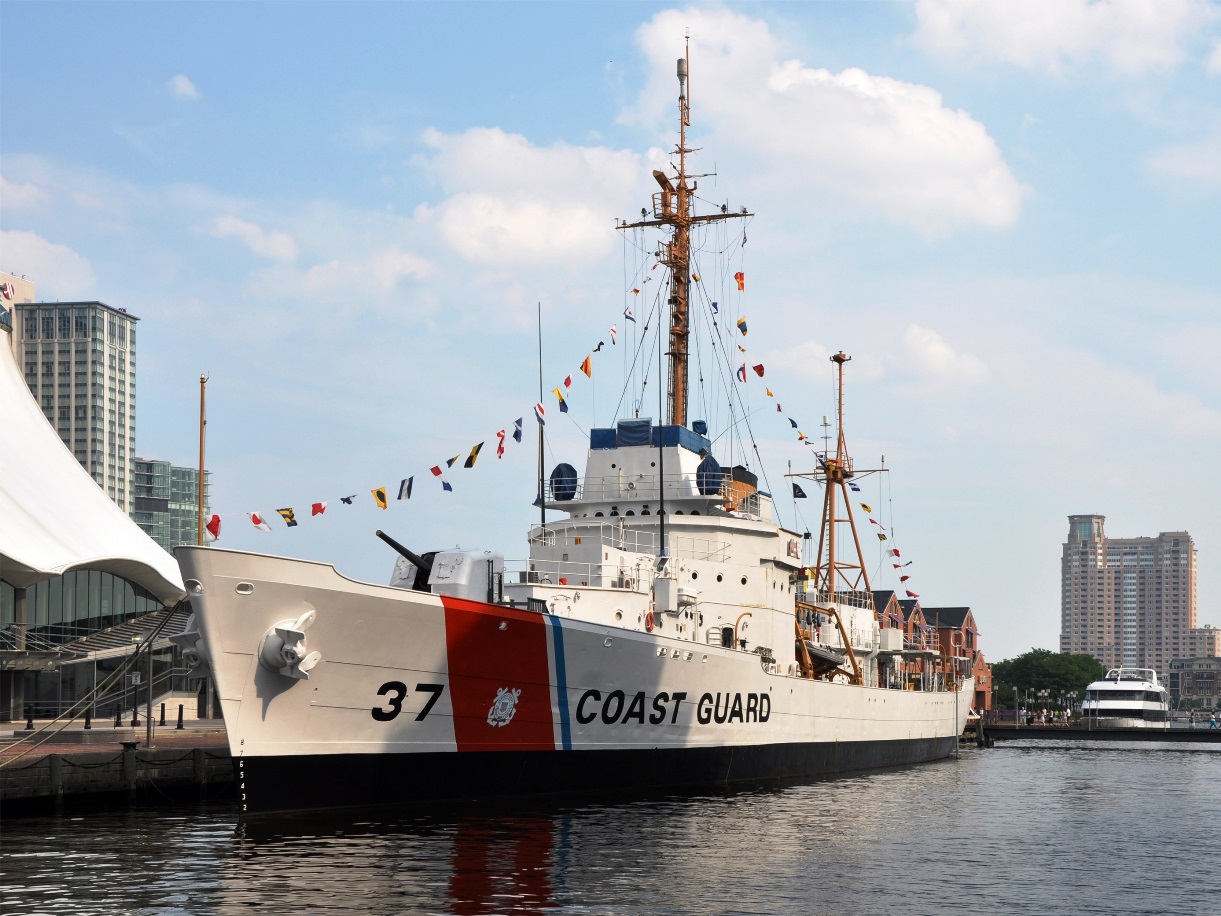 The US Coast Guard Cutter TANEY is one of the famed Secretary/Treasury Class Coast Guard cutters built in the mid 1930s and which saw extensive service in war and peace for half a century. TANEY's keel was laid on 1 May 1935 at the Philadelphia Navy Yard where she was built alongside three of her sister ships, CAMPBELL, DUANE and INGHAM. 327 feet long with a beam of 41 feet, and originally displacing 2000 tons, TANEY was designed for peacetime missions of law enforcement, search and rescue, and maritime patrol. Her original armament consisted of two 5"/51 caliber deck guns, and two 6-pounder saluting guns. TANEY was also originally equipped to carry a Grumman JF-2 "Duck" float plane.

Commissioned on 24 October 1936, TANEY was first home ported in Honolulu, Hawaii, where, until the outbreak of World War II, she interdicted opium smugglers and carried out search and rescue duties from the Hawaiian Islands through the central Pacific Ocean. In the pre-war years, TANEY also made regular cruises to the equatorial Line Islands, some 1500 miles southwest of Oahu, to re-supply and support to American colonists there.

In 1940 and 1941, TANEY received successive armament upgrades in anticipation of war. These upgrades included an additional 5"/51 caliber gun on the fantail where her float plane once stood, three 3"/50 caliber dual purpose guns (capable of shooting at both surface and airborne targets), additional .50 caliber machine guns, depth charge racks and throwers, and sonar for locating submarines.

On the eve of Pearl Harbor, TANEY was officially assigned to the US Navy's Destroyer Division 80, though she retained her Coast Guard crew. When Japanese aircraft attacked Pearl Harbor and other American military installations in Hawaii on 7 December 1941, TANEY was tied up at Pier 6, Honolulu, where she was able to repeatedly engage Japanese planes which over flew the city. When the attack subsided, TANEY immediately commenced anti-submarine patrol duties off Pearl Harbor.

From December 1941 until the fall of 1943, USCGC TANEY operated from the west coast of the US through the Central Pacific carrying out anti-submarine patrols, convoy escort duties as well as special assignments. In July 1943 the cutter fought off an attack by a Japanese "Mavis" patrol bomber while delivering a US Navy survey party to Baker Island along the Equator.

After a major refit in the fall of 1943, during which the ship lost her older 5"/51s and 3"/50s and received four 5"/38 caliber dual purpose guns, TANEY was transferred to the Atlantic Theater where she served as Flagship of Task Force 66, US Atlantic Fleet. During this Atlantic stint, TANEY was the command vessel for six convoys of troop and supply ships between the US and North Africa. On the evening 20 April 1944, TANEY narrowly dodged several torpedoes while fending off a large scale attack by German aircraft against Convoy UGS-38. Three ships were lost in the attack including the ammunition ship SS PAUL HAMILTON and the destroyer USS LANSDALE.

In 1945, TANEY returned to the Pacific after a dramatic reconfiguration as an Amphibious Command Ship (AGC). During the battle for Okinawa, the cutter was the Flagship for Rear Admiral Calvin Cobb, USN, who commanded a variety of naval operations off the island of Ie Shima, immediately northwest of Okinawa. During April and May 1945, at the height of the campaign, TANEY was under frequent attack and was credited with destroying four Kamikaze planes and 1 "Betty" bomber during 119 separate engagements in which her crew stood to battle stations. Immediately after the end of the Pacific war in September 1945, TANEY steamed into Japanese home waters where she assisted with the evacuation of Allied prisoners of war.

Following World War II, TANEY was reconfigured for peacetime duties and from 1946 until 1972 she was home ported in Alameda, California. Known as "The Queen of the Pacific," TANEY carried out virtually every peacetime Coast Guard duty including decades of Ocean Weather Patrol throughout the Pacific, fisheries patrols in the Bearing Sea and countless search and rescue missions. During the Korean War, TANEY received additional anti-submarine weapons and frequently carried out plane-guard duties off Midway Island and Adak, Alaska. In April 1960, TANEY had the honor to host French President Charles DeGaulle on a VIP tour of San Francisco harbor.

By the late 1960s, TANEY had become the last United States vessel still in commission that had seen action during the 7 December 1941 Japanese attack on Hawaii. Consequently, from that time on she was often referred to as "The Last Survivor of Pearl Harbor."

In 1969-70, during the Vietnam War, TANEY participated in "Operation Market Time" in the South China Sea. As a unit of Coast Guard Squadron III, TANEY interdicted illegal arms and supplies along the coast of South Vietnam , fired over 3,400 rounds of 5"/38 ammunition in support of American and South Vietnamese troops, and provided medical assistance to more than 5,000 Vietnamese civilians.

In February 1972, TANEY was reassigned from the 12th Coast Guard District in San Francisco to the 5th Coast Guard District in Virginia. From 1973 to 1977, TANEY carried out Ocean Weather Patrol at Weather Station HOTEL, some 200 miles off the coast of New Jersey, as well as "hurricane hunting" for which she received a special Doppler weather radar installation atop her pilot house. In September 1977, TANEY had the distinction of completing the Coast Guard's last ocean weather patrol when she closed out Ocean Weather Station HOTEL.

From 1977 until 1986, TANEY carried out search and rescue duties, fisheries patrols in the North Atlantic, drug interdiction patrols in the Caribbean, and summer training cruises for the Coast Guard Academy. During this period she made 11 major seizures of illegal drug including a 1985 bust which netted 160 tons of marijuana – the largest in US history.

On 7 December 1986, after more than 50 years of continuous service, TANEY was decommissioned at Portsmouth, Virginia, and donated to the City of Baltimore to serve as a memorial and museum.