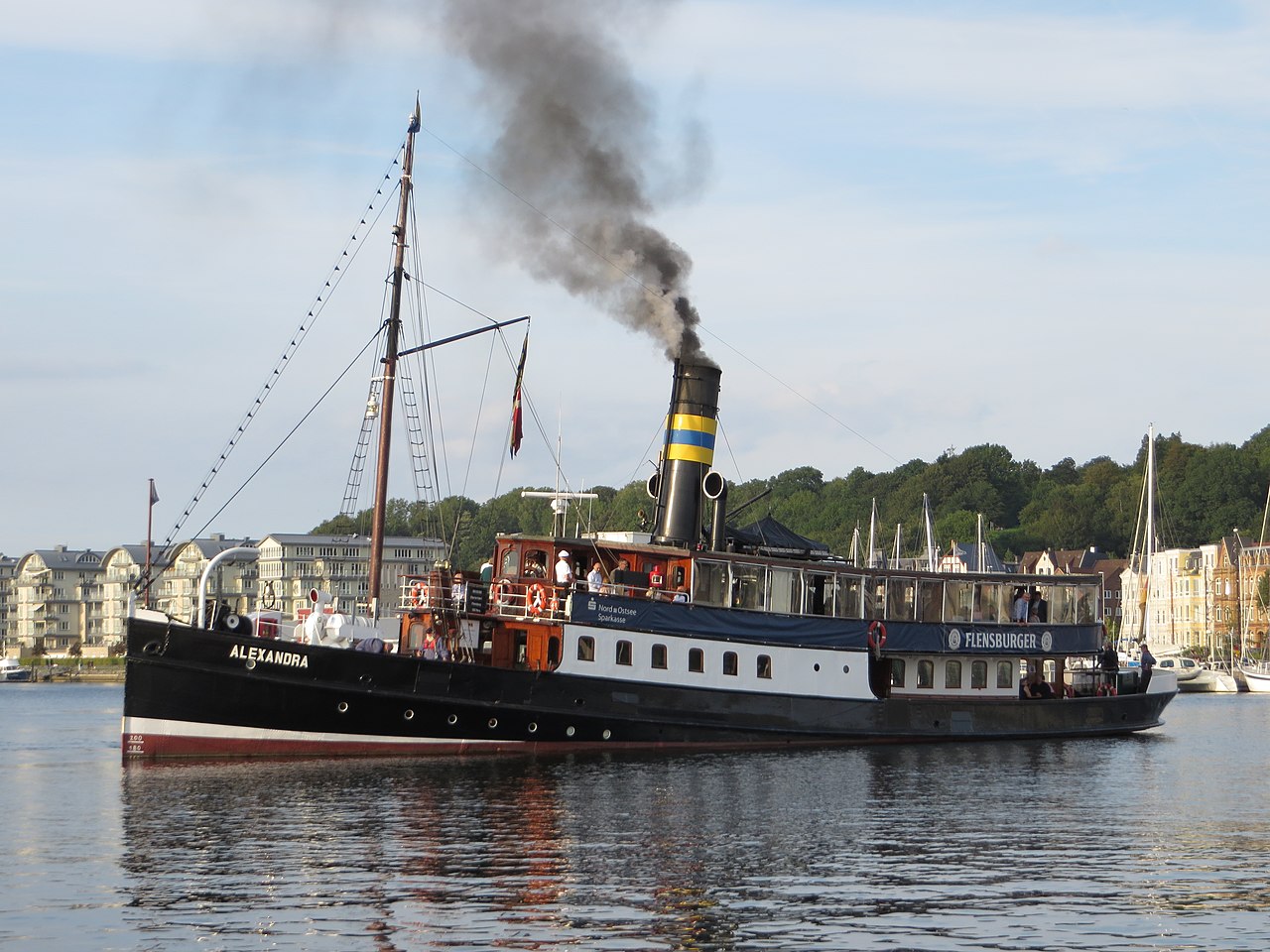 The ship was built in Hamburg at the Janssen & Schmilinsky shipyard for the Vereinigte Flensburg-Ekensunder and Sonderburger Dampfschiffsgesellschaft ("Vereinigte" for short), launched in May 1908 after Princess Alexandra of Schleswig-Holstein-Sonderburg-Glücksburg was christened and handed over to the shipping company on May 31, 1908. The ship was put into regular service on the Flensburg Fjord . During the First World War it served as an outpost boat from 1914 to 1918 . From 1919 to 1934 the ship did liner service for the "Vereinigte", which was disbanded in 1934. The Alexandra was taken over by the newly founded Förde-Reederei GmbH . At the sailing competitions in the Kiel Fjord during the Olympic Games of 1936 , the ship was used as a regatta escort ship. Later, the Alexandra became a pilot transfer steamer in the Baltic Sea as well as a diving vehicle and torpedo fishing boat in the Gdańsk Bay . In 1945 the Alexandra in Gotenhafen served as a feeder ship for the Wilhelm Gustloff , was involved in the evacuation of Königsberg and was involved in othersUsed to transport the wounded and refugees across the Baltic Sea . In the last days of the war, the ship loaded with refugees returned to Schleswig-Holstein. Between 1946 and 1975 the Alexandra was used again in regular service, especially between Flensburg and Glücksburg . At the sailing competitions of the Olympic Games in 1972 , the steamer was used again as an escort ship for the regattas. Due to unprofitability the decommissioning followed on August 31, 1975. The ship remained inaccessible in the port of Flensburg and was left to decay.

Between 1975 and 1979 the group "Save Alexandra " was formed. On July 1, 1979, the "Association for the Promotion of Steam-Driven Fördeschiffe e. V. ", which later became" Förderverein Salondampfer Alexandra e. V. “renamed. Between 1980 and 1982 the ship was repaired and took part in harbor festivals. In 1982 the Alexandra was recognized as a cultural monument by the Schleswig-Holstein State Office for Monument Preservation . On October 1, 1986, the steamer was given to the association by the shipping company in return for a complete repair. The to 820,000 DMThe estimated costs of the redevelopment were subsidized by the federal government, the state and the employment office with 700,000 DM, the remaining amount was to be raised by the association. The renovation of the hull at the Peter Eberhardt shipyard in Arnis began in March 1987, and the ship returned to Flensburg on December 18, 1988. Since 1989, the Alexandra has been a regular ferry service on the Flensburg Fjord from May to September. On October 26, 1990, Alexandra was officially registered in the Schleswig-Holstein monuments book. The steamer has been taking part in the Kiel Week since 1991 . In 1992, the “Kuratorium SalondampferAlexandra e. V. “founded as a fundraising association. Since 1993, Alexandra has hosted Europe's largest regular steam meeting, measured by horse power , the Flensburger Dampf Rundum .

1997: Major machine overhaul in a shipyard in Hamburg-Harburg. The Schleswig-Holstein Savings Banks Foundation is donating the required DM 120,000

1999: The ship gets a new propeller in Arnis

2002: Receipt of the safety certificate for traditional ships

2006: Extensive renovation work in Arnis (renewal of the aft edge of the upper deck and new floor slabs)

2013: Crack in the dome area of ​​the boiler when moving away by the TÜV and repair by the Wulff company from Husum

2014: Concrete plans to replace the boiler

2015: stay at the shipyard at the Friedrichs brothers with subsequent leakage when sipping, sealing with a concrete box

2016: Extensive hull renovation at the Friedrichs brothers with surprises from March 19 to May 25, transfer trip to Husum and boiler exchange on October 8

2018: Completion of the resta in the foredeck and installation of the new ceiling cassettes, 110th birthday

2019: filming in Sønderborg, heeling test, new "lifeboats" based on old models, 13.11. 2019 season end and planning of the forecastle, first cut into the old deck

2020: corona pandemic and lockdown, the scaffolding remains in place and extensive restoration work will take place underneath, the new mast will be set, all trips for the season will be canceled.