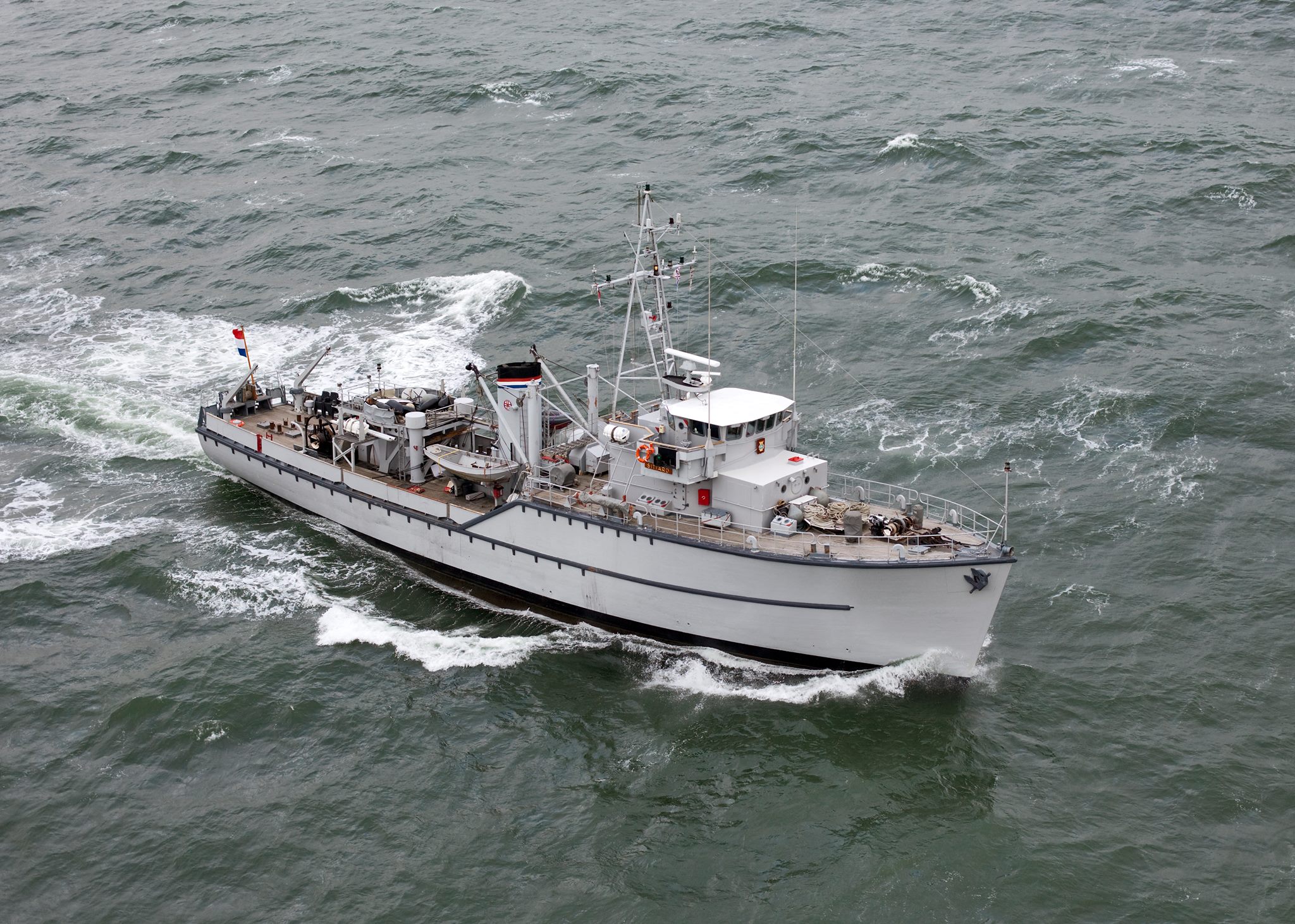 Sittard is a Dokkum-class minesweeper from the mid-fifties which has served with the Royal Netherlands Navy for 40 years and is currently in use with the Harlingen Sea Cadets.

After the end of world war 2 there was a need for new minesweepers to help with clearing European coastal waters from the thousands of mines still left. Based on the design of the British Ton-class minesweepers, 16 Dokkum-class ships were built in various shipyards around The Netherlands. Sittard’s keel was laid down at Niestern Scheepsbouwunie in Hellevoetsluis on March 10 1955, she was launched on April 26 1956 and commisioned on December 19 the same year. Over the next forty years she had a varied career with the Royal Netherlands Navy, with numerous minesweeping operations, training exercises and several periods attached to NATO’s Standing Naval Force Channel. In 1969 Sittard received a visit from His Imperial Highness Prince Alexander Desta of Ethiopia and in the spring of 1978 she was involved in the search for a crashed F104 Starfighter.

During the mid-seventies the entire class, including Sittard, underwent a midlife modernization, which included among other items the installation of an enclosed bridge, improvements to the messrooms, toilets and showers and the installation of a new refrigeration plant. By the late eighties the ships of the class were starting to show their age, and as one of the six ships still remaining in active service, Sittard was given a life-extension update. This resulted in another change to the ship’s exterior, with the extension of the forward superstructure to make room for an additional four bunks. The galley was updated, all three auxiliary engines were replaced and larger bunks were built in the two main bunk rooms.

The end of Sittard’s career in the Navy came on December 13, 1996, when she was the last of the class to be decomissioned. This also made Sittard the last wooden-hulled warship in active service with the Royal Netherlands Navy. She was then laid up at the Naval Base in Den Helder for a year before being made seaworthy again by the navy, and on November 23, 1997 Sittard was transferred on long-term loan to the recently established Harlingen unit of the Dutch Sea Cadet Corps. Two years later the Sea Cadets formally took ownership of Sittard. She has served the Harlingen Sea Cadets ever since as a fully seaworthy training ship, taking cadets on training cruises throughout The Netherlands and to neigbouring countries. Every summer Sittard goes on a 10-day cruise with a crew of cadets aged 11 and onwards, supervised by a group of dedicated and experienced volunteers. In addition the cadets take her out on regular daytrips and weekend cruises during the summer season. Some particularly memorable summer cruises took Sittard and her crew to the UK (Great Yarmouth, Ipswich, Chatham), Germany (Borkum, Leer) and Zeebrugge in Belgium. On several occasions Sittard assisted the Harlingen-Hull-Harlingen sailing regatta as start and finish ship and in the spring of 2009 she sailed to Normandy to take part in the 65th D-Day commemoration.

After years of service for the Sea Cadets, the link to the Royal Dutch Navy was partly restored when in July 2015 she became one of the founding participants in the platform “Varend Erfgoed Koninklijke Marine”, or “Sailing Heritage Royal Netherlands Navy”. She is currently being transferred to a separate foundation that will preserve her and keep her seaworthy and available for the Sea Cadets, while striving to restore her and maintain her original appearance where possible. She is maintained and sailed by a dedicated crew of volunteers and cadets, who will make sure Sittard will inspire young people to choose a seafaring career for many years to come.