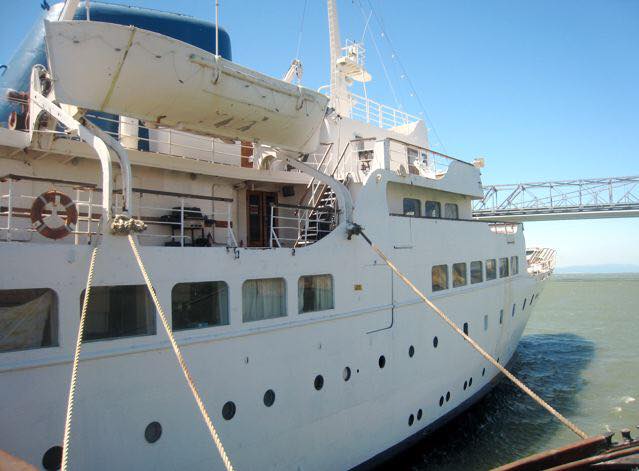 It was time for the big move to San Francisco Pier 38. We had maybe three hours until sun up and everyone was wide awake at least everyone but me. I was exhausted. I just needed to make sure everything was ready to go and finally maybe I could sleep for a few hours.

We pulled all of the rigging onboard including the ramps and small boats and had two lines ready to release. The waters were calm and everything appeared as if this trip was going to be smooth sailing. At just about sunrise Indy ordered the lines released and we floated out to the center of the river while vessel number two attached its lines on the opposite side stern. Everything was working flawless. Within a half an hour we were underway and the sun just peeking over the horizon.

I needed sleep so I went to my cabin to get some rest. The crew had things under control and we were making good time.

We had Indy as captain on the main tow vessel and his good friend captaining the secondary vessel and I hired a captain that was referred by Mr. Potter to act as Captain aboard the Aurora. What could possibly go wrong?

After an hour into the tow I woke to horns and the sound of Diesel engines running at high rpms. I quickly ran to the decks to find that we were sideways on the river. The crew seemed calm but why were we sideways floating back down the river? As it turned out Indy wanted to re tie his lines for better control. He waited until we reached the widest part of the river to do so.

After a few minutes he was back in control and we were back underway. The waters were getting more and more rough as we headed towards San Francisco Bay. I tried again to sleep but with so much going on I couldn't get back to sleep. It was miserable but I knew that once we arrived I could finally relax and sleep as much as I needed so I decided to keep working.

For maybe 5 hours we headed towards the bay without issue and then suddenly I heard and felt a loud crash. I figured right away that this can't be good. I ran to the deck and couldn't see anything wrong. I asked around to find out what the noise was and finally got an answer. The captain aboard the Aurora wasn't paying very close attention and one of the tow vessels had ran over a floating light bouy. It took almost 5 minutes for it to pop back up from the water. Indy decided it was best to keep this quite rather then reporting anything.

We went the next several hours with no issues. It was actually an amazing feeling to be on the Aurora as she was as underway. Everyone was enjoying the sun on the decks as we passed under bridge after bridge. Peter Knego was photoing as much of the experience as possible. He gathered some amazing shots. One could almost imagine the what it was like when she as in service.

At approximately 4pm Indy received a phone call from the Chief Wharfinger for the City of San Francisco and this guy wanted to talk to me. I was sure that he just wanted to congratulate me or invite me to dinner or something nice like that. To be honest I had no idea just what roll the Chief Wharfinger even played so I wasn't that nervous to speak with him. Indy handed me the phone.

The Wharfinger without delay told me that I could not bring the Aurora into San Francisco and that we had to turn back. For a moment I was speechless. I guess I needed to find out just who this guy was and under what authority he could demand this. The first thing out of my mouth was " Sorry I can't do that ". Then things went back and fourth for a few minutes and he told me that the Port Police would not allow us to dock under any circumstances. I then said to him I would have to call him back. I needed to collect my thoughts. This call didn't exactly make me happy. Especially when I was exhausted.

I've learned a lot since I found the Aurora and continue to get lessons in life as I go. You can fallow every law and rule and feel like your a better person for doing so but someone out there still will judge you and try and make you something that you are not. After this phone call it sounded like if I attempted to come into the Port of San Francisco then I would be breaking some kind of laws. In the Ports eyes I was now the bad guy. It is impossible to make everyone happy. To some people what we are doing with the Aurora is criminal and to others it is saving a small piece of history. The Port of San Francisco cares nothing about history however.

After I hung up I called Mr. Potter and his Pier Manager James. I told them the situation and then James immediately called the Port and had some words with them. We would going slow at this point just in case we had to turn back. We were not even sure if we would have enough fuel to make it back but most likely not. I was was exhausted and really didn't feel like dealing with this type of an issue. But the stress was there. This was one of the most stressful times in my entire life. I think I must have aged a year that day.

During this experience Peter Knego was aboard and taking notes and the drama unfolded. He would have one hell of a story as he was not only a journalist that day he was part of the crew.

I think we were all very concerned on how this next conversation was going to go. The time seemed to slow way down. Each minute felt like ten.

Finally the Port of San Francisco called back......