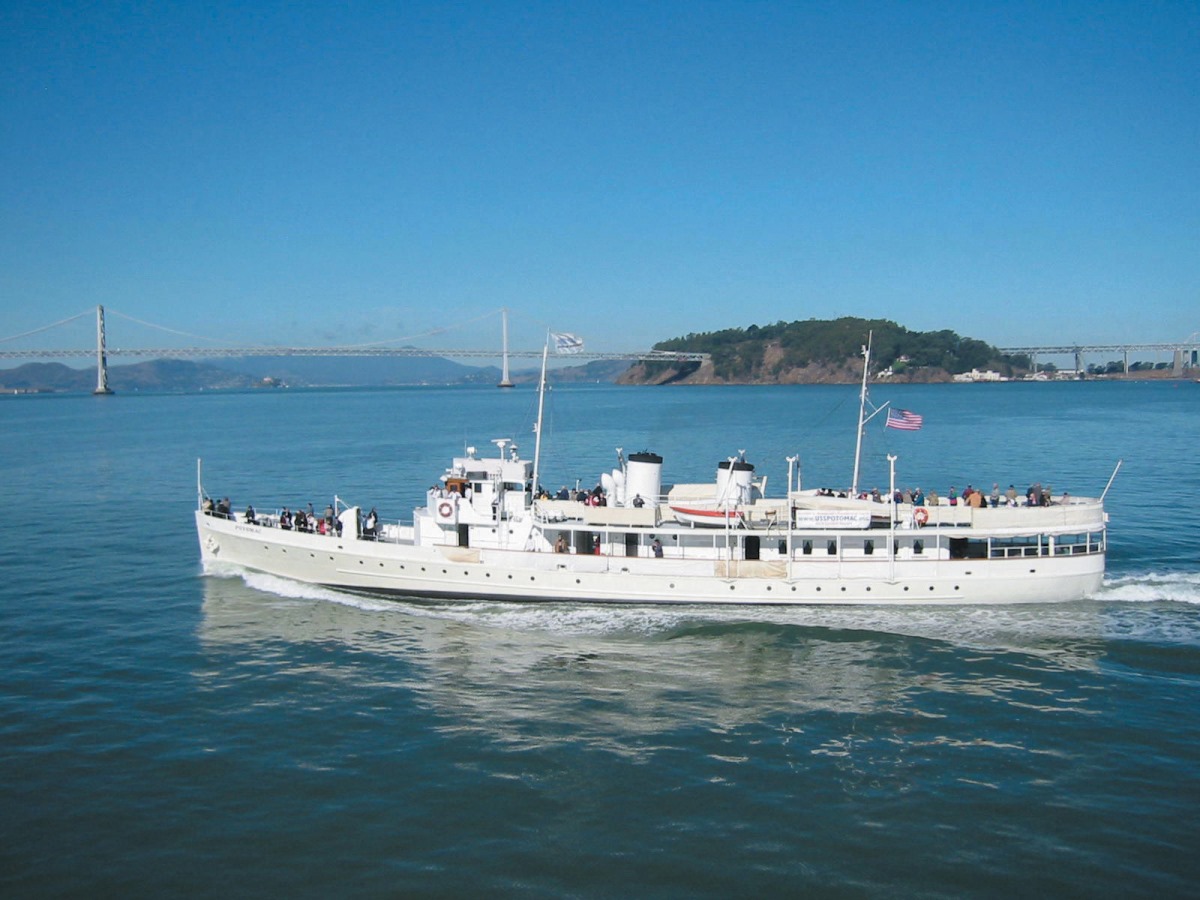 Potomac was originally built in 1934 by the Manitowoc Ship Building Company, Manitowoc, Wisconsin as the United States Coast Guard Cutter Electra. She was converted to serve as a presidential yacht and commissioned into the United States Navy in 1936. In the following years, Potomac was heavily used by President Franklin D. Roosevelt, for fishing trips and informal political meetings. The second funnel is fake, and concealed the elevator used for raising Roosevelt in his wheelchair in the unlikely event of having to enter lifeboats on the roof. In 1939 the United Kingdom's King George VI and Queen Elizabeth travelled with the Roosevelts aboard Potomac to George Washington's home at Mt. Vernon.

On 3 August 1941, President Roosevelt left Washington to board Potomac at the submarine base at New London. Potomac then sailed for Appogansett Bay where the President did some fishing and entertained guests including Crown Princess Märtha of Norway. Eventually Potomac anchored in Menemsha Bight in Vineyard Sound, where the heavy cruiser USS Augusta already lay at anchor. In the early hours of 5 August Potomac came alongside Augusta and the President and his party transferred to the warship. Augusta then proceeded at high speed to Newfoundland for a clandestine meeting with Winston Churchill. During this meeting, Roosevelt and Churchill agreed to the Atlantic Charter, agreeing to the principles of the Allied partnership during World War II and setting the scene for the United Nations to plan the post-war peace.

In the meantime and for security purposes, the President's flag continued to be flown from Potomac while she transited the Cape Cod Canal to New England waters. A Secret Serviceman, approximating the President in size and affecting his mannerisms when visible from a distance, played a starring role in the deception. Press releases issued daily from Potomac led all who read them to believe that the President was really embarked in his yacht on a pleasure cruise. After the meetings, Augusta returned the President to Potomac on 14 August.

After President Roosevelt's death, Potomac was decommissioned by the Navy, and returned to US Coast Guard custody in November 1945.

From 1946 she served with the Maryland Tidewater Fisheries Commission, and was sold to Warren G. Toone in April 1960 and used as a private ferry boat between Puerto Rico and the Virgin Islands.

In January 1964 she was purchased by Elvis Presley for US$55,000. Presley offered it to the March of Dimes who could not use it. He then gave it to St. Jude Children's Hospital, in Memphis, to sell as a fund raiser. The hospital was able to sell it that same year for US$ 75,000. By 1980, she was involved in drug smuggling and was seized by the United States Customs Service in San Francisco, then towed to Treasure Island, where she sank.

After being refloated by the U.S. Navy just two weeks later, Potomac was sold to the Port of Oakland for $15,000 and underwent a major restoration. She is now preserved by the Potomac Association, and berthed at Jack London Square in Oakland. She is open to dockside tours and regular cruises on San Francisco Bay.

Potomac was used in June 2011 to film shipboard scenes of the Paul Thomas Anderson film The Master. Actors Joaquin Phoenix, Philip Seymour Hoffman, Amy Adams and others shot scenes aboard the yacht while docked and under way.