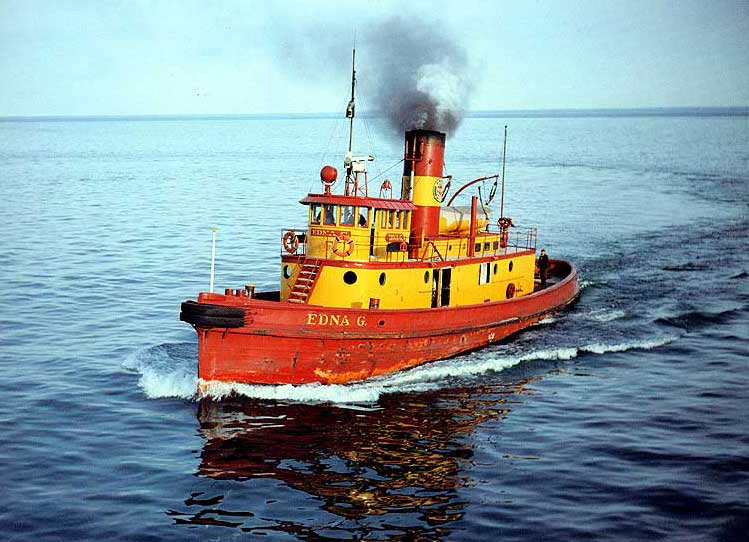 The Edna G. was built in 1896 by the Cleveland Ohio Ship Building company. She was one of the most powerful tugs of the time. The tug is 110 feet long, 23 feet across the beam and draws 15.5 feet of water. She was named after the daughter of then president of the railroad Jacob Greatsinger. She operated out of Two Harbors all her life, except for two years 1917-1919, during WWI when the government requisitioned her to move barges and troop ships out on the east coast. The tug was built with a steel deck and hull, but the super-structure was wood. The government had the steel super-structure installed before taking the tug to the east coast.

The tug operated with a four man crew, a Captain, an engineer, a lineman and a fireman. They ran three shifts eight hours on and sixteen hours off. Usually the only crew on board was the crew on duty, the rest could be at home since the tug operated out of the harbor. Some lived on board if they didn’t have a home in town.

The engine is a double expansion steam engine, which means the steam is used twice. This first cylinder is a control piston for the steam, it allows the steam to come into the next piston and then the steam is transferred to the last piston where it is used again. The tug first had a fire tube boiler; it was changed to a B & W water tube boiler in 1949. In the water tube boiler the water is in the tube and the heat comes around the tube making the steam. The engine has 1000 hp (horse power) and average speed is 25 rpm (revolutions per minute). The engine operates at 75 to 100 pounds pressure (relief valve pops at 100 lbs pressure). This power is transferred to the propeller shaft that measures about 10 inches in diameter and is solid steel to the propeller that has 4 blades and is 9 feet in diameter. There are no gears or clutches to shift, so they had to turn the engine in the opposite direction to back up the tug. The Edna G is steered with a lever. It did have a wheel at first but when they put the lever on (about 1940) it was easier to control. There is a steam turbine generator for electricity.

The coal bin is in a U shape around the boiler room. The tug holds 70 tons of coal and it was always shoveled. They would burn about 5-6 tons a day and reload about every 5 days (about 25-30 tons). The last fireman that served on the tug said he would shovel about 12 shovels full of coal in each side of the boiler every ten minutes when the tug was operating in the harbor.

The monitor (water cannon) has about a three foot nozzle that will spray water over the ore dock at about 3000 gallons per minute. It was used to fight fires and to wash off the docks after an ore boat loaded.

In 1974 the Edna G was place on the National Historic Register. The refitting of the great lakes freighters with bow thrusters and variable pitch propellers eliminated the need for tugboats in the harbors.

During the Bicentennial, a one-mile race was held between the Edna G, a Coast Guard cutter and a diesel-powered tug. She defeated them easily. After the race, Captain Adolph Ojard commented, “Now when Edna retires, she can go with dignity”. The DM&IR donated the tug to the City of Two Harbors after her retirement in 1981. She had served the port for over 84 years.